Friday evening started with a concert of the José Luis Gutiérrez trio. Being the winner of the 2012 audience award they got a chance to show their skills again and did it in great style. Their show contained the Theme “Cuatros Elementos”, meaning the 4 elements. Gutiérrez started with a very nice sober sax solo referring to ancient prayers for the earth in Castillia (Spanish Moment). Later water, wind and fire would follow, while Gutiérrez always shortly explained the influence on the music. In every part he completed changed the atmosphere of the music with his trio. The separate parts were also visualized,  like the earth being opened with a knife  symbolising  what the earth can give us. Gutiérrez constantly  connected with the audience  using a great sense of humor. Drummer Legido also played a nice part in the spectacle with a lot of surprises. The thought comes up that it would be all too much and too disturbing for the music, but it all worked out fine. Beautiful compositions like Five Oceans were played in a subtile way that perfectly fitted the atmosphere of the piece, while using the space for solos rightly. After 2012 again a standing ovation for this renewing way of bringing jazz to the people. 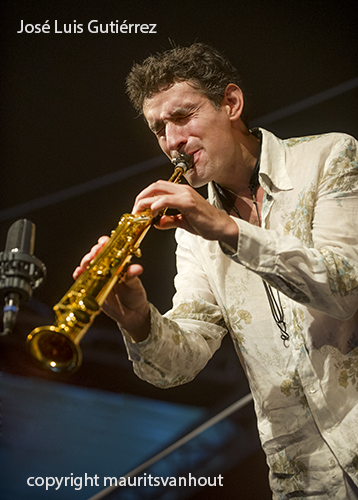